The March of Time 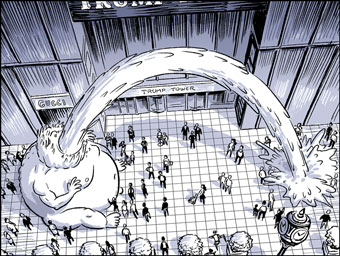 When I finished the script and layouts for The Sculptor a few years back, there were parts of the story that meant one thing at the time, but would change meaning by the time it was published; and keep changing meaning in one case.

One of David’s night sculptures, above, is a case in point. When I included it among his many crazy bits of urban vandalism, it was just a jab at a rich demented celebrity with just a little power. Obviously, that power multiplied considerably this year. Now, the thing looks purely political but it really wasn’t so much at the time.

Another was the scene where David and Meg are walking down 5th Avenue and see several naked women on the steps of St. Patricks Cathedral, engaged in some kind of protest. David’s explanation: “Somebody must have said something in Rome again,” which made perfect sense with the hyper-conservative Pope Benedict, but seems almost to have the reverse meaning with his successor; as if the new Pope might’ve somehow encouraged it!

Finally, there was a line late in the book about Ukraine, written before the Russian annexation of Crimea. It still makes sense, but the meaning definitely got way darker. Note the spelling error in panel 5; caught before it went to press, I’m happy to say.

Any book is bound to change meaning over time, usually after they’re published. But I guess a little in-process change is inevitable when you’re as slow as I am!

Posted in Graphic Novels, The Sculptor