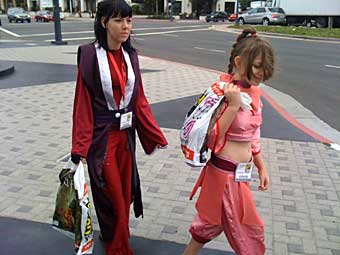 Winter and her friend Amanda on their way to cosplaying Ty Lee and Mai from Avatar: The Last Airbender. More pictures here, here and here. (Note: The family and I are big fans of the cartoon, though like others, we’re concerned about the lack of Asian actors in the upcoming film.)

Con is done for another year. Saw lots of friends, made a few new ones, and got a ton of cool new graphic novels that I may write about later, but overall, it was a pretty ordinary year.

Comic-Con itself, though, is at a high water mark of sorts. With a Jim Lee Google Logo commemorating the event around the world and major news outlets like USA Today treating Con like a national holiday, “Nerd Prom” has never seemed more central to American culture.

As usual, comics pros and fans were grumbling that Movies and TV seem to overshadow Comics more and more as Con grows. I’ve never been quite as invested in that battle myself since there are excellent comics-centric shows like MoCCA, SPX, APE and TCAF out there to offset Comic-Con’s media obsessions, but it’s been an interesting balancing act to watch over the years. As Sky’s friend Kendra so eloquently put it yesterday: “Either the nerds are trying to take over the world or the world is trying to take over the nerds.”

On the first day in town, we got an early dinner at Spaghetti Factory. While waiting for our seats, the late afternoon sunlight fell in small pockets on the floor and walls. I got a picture of Winter with my iPhone that looked like a Vermeer painting. Someday, all of our Con moments will probably look like this in our memories, bathed in the late afternoon glow of nostalgia, but for now the sun is still high over the world of comics.