The Scale of the Universe 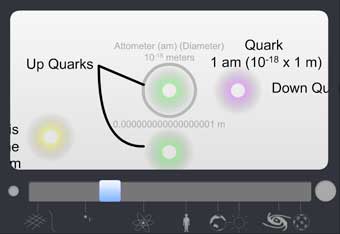 Here’s a great z-axis zoom-through of the universe [link via Kris Lachowski] showing the vast range of scales from the sub-atomic level to the outer reaches of the known universe.

When I was a kid, I read an illustrated book from 1957 called The Universe in 40 Jumps that pulled a similar trick in a succession of 10x steps; a predecessor to films like Powers of Ten (and partial inspiration for The Right Number).

Looking at this latest effort to make the incomprehensible comprehensible, all I can think is that the universe has gotten A LOT bigger, since I was a lot smaller.

Have a great weekend…