Shanghai Wrap-Up: The Side Trips! 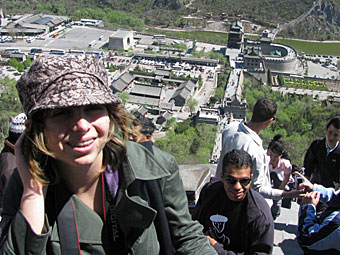 Dude, that’s totally Sky on the Great Wall of China.

Though most of our journey to China took place in spectacular Shanghai, we decided since it was Sky’s 16th birthday to splurge a bit on a couple of brief side-trips.

First to the enchanting Hangzhou with our great hosts Mikey and Alyssa and new friends David and Kim, where, thanks to some light rain, we fulfilled every tourist photographer’s dream: To make China look as much like China as possible.

Then, of course, to stately Beijing, for the great triumvirate of all photo ops: Tiananmen Square, The Forbidden City, and of course, The Great Wall of China (a ringed section thereof with some extremely steep and intimidating climbs).

Sky and I are home now. We arrived in Los Angeles about 40 minutes before we left Shanghai. Efficient.

In honor of Earth Day, the world just got a little smaller for my daughter and I—and much, much bigger all at once.

[Note: I’ve added many photos to these sets since Wednesday afternoon. Also finally adding some captions to these albums]