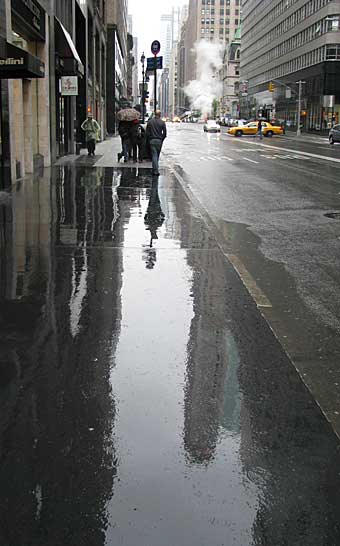 I’m still in New York, taking thousands of reference photos for the graphic novel. The two-day seminar (Friday and Saturday) was packed and energized; a great class with a lot of talent and spirit. Now it’s just me and my camera for a couple of days. I promise they’re not all of high horizon line rainy sidewalks like the above, but damn, I do love me some high horizon line rainy sidewalks…

Originally planned as a solitary expedition, this part of my trip still had me crossing paths with some old friends including Tracy White and baby Suniva, Heidi MacDonald and beau Ben, and the Legendary Brian Dewan who was showing his work with a bunch of terrific cartoonists Thursday night as part of the Cartoon Carousel series (which is very cool, though I’m not sure how to explain it, and I’m not sure if they have a website). Also saw a slew of great artists, old and new, at S.V.A.’s great Fresh Meat show Saturday and met briefly with the astounding Shaun Tan at the tail end of his signing at Books of Wonder.

Dropped out of sight a bit, web-wise these last few days, but it was for a good reason. I’ve been thinking non-stop about the graphic novel and the role of this city in the story. It’ll be a long time before I can show you guys anything from the book, but I hope it’ll be worth the wait. I still have a few trips to go (including fun ones like next week’s TCAF), but there’s big part of me now that just wants to draw and draw and draw and draw and draw and draw.

Posted in The Sculptor, Travel