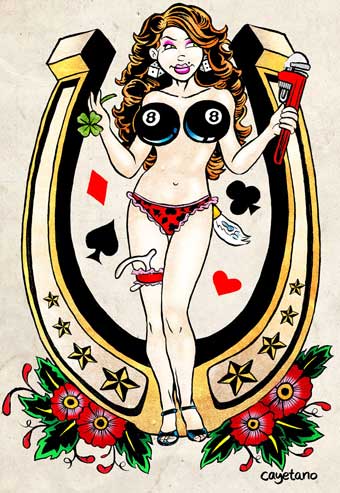 Cat Garza has kicked off “Flash Fridays” with a loving, adorable take on a classic Tattoo motif. Cat’s offering line files for anyone who might want to wear his designs. Keep a watch for more tatoos in the coming weeks.

Cat always called the San Diego Comic-Con “Sandy Eggo,” Larry Marder called it “The Gathering of the Tribes,” and Heidi MacDonald and others have been calling it “Nerd Prom,” but whatever you call it, the greatest of all American comics conventions is drawing near.

We’ll be there, as we have for all but one of the last 21 years, but taking it easy this time around. Mostly just relaxing and seeing friends (though I am a small part of at least one cool panel event I’ll be telling you about soon).

Con passes are — incredibly — sold out already, but if you want them and can’t get them, you may want to follow the Con’s Twitter account where they’ve been announcing official auctions regularly for the few passes they still have.