A Study in Contrast: Lisa Hanawalt and Laurie Sandell 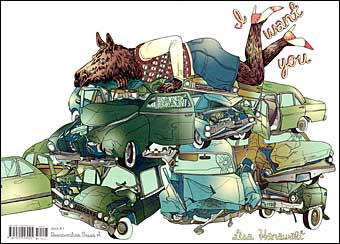 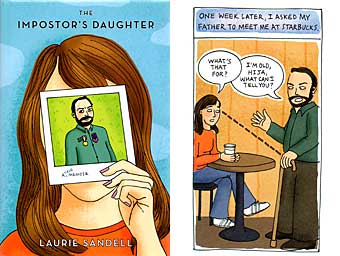 I got a TON of books at San Diego. It would take me half a day just to list and show them all, much less review them, but a couple which caught my eye toward the end of the day on Sunday offered some interesting contrasts I thought worth noting here.

I Want You by Lisa Hanawalt is a 32-page black and white pamphlet with color covers from Buenaventura Press. It’s filled with weird, sexually-charged or scatological short subjects. Some are funny, some are disturbing, many are both. It would look at home in Kramers Ergot.

The Imposter’s Daughter by Laurie Sandell is a 245-page full color graphic novel from Hachette Book Group. It’s an autobiographical account of the author’s relationship with her father, an Argentine immigrant whom she gradually discovers is a fraud who’s taken advantage of everyone around him for years, including his own family. The art is simplistic and straightforward.

The number of comics readers in San Diego’s mammoth exhibit hall who’d be likely to bring home and enjoy both comics could probably be counted on the fingers of one hand, but I’m apparently one of them. I liked both for different reasons.

Hanawalt’s pages are aggressively experimental. She takes her art seriously, even when the subject matter seems tossed-off. Her line-work crackles with energy. The details almost overwhelm her jumbled compositions, but bold contours always step in just in time to make sure the form isn’t lost. There’s no pretense of a “story,” but there is content; an echo chamber of fleshy obsessions and violently upturned social mores.

Meanwhile, Sandell’s graphic novel is a mainstream book in nearly every sense. The (presumably) true story is told as literally as possible. Sandell is no virtuoso artist, but her layouts are sensible and the drawings get the job done. Cars look like cars, bottles look like bottles, and hands have five fingers. Every line and color choice serve the story, and the story is an engaging one, filled with mystery, sex, addiction, and the parade of celebrities Sandell encountered as a reporter and contributing editor at Glamour. It’s a beach read.

Whereas Hanawalt was showing her wares in person at Buenaventura’s table—a venue so lovably alternative that you might expect denizens to refer to Fantagraphics as “The Man”—Sandell’s book was being offered in a tidy, cookie-cutter Hachette booth that looked like it hopped directly over from Book Expo, and being given away, perhaps on the assumption that everyone is a retailer (and thanks to a great cover designed by Julianna Lee it had no trouble finding takers).

I can imagine each of these books rubbing someone the wrong way. In some respects, Sandell’s glamour-sprinkled tell-all is a hard-core comics lover’s worst nightmare; a book deal fueled by celebrity, completely bypassing comics history and craft, ready to leapfrog more serious or well-crafted graphic novels onto The Today Show or even Oprah. Meanwhile, Hanawalt’s work is the type often dismissed by artists I know as “pretentious” or “self-indulgent.”

I like Sandell’s book though, because it was a fun read. It can gently coax new readers into comics who would have never cracked open an Asterios Polyp much less a Blankets, and because a healthy mainstream has never precluded a healthy alternative. And I like Hanawalt’s work because it creates sensations I’ve never seen comics achieve and opened my eyes to radical possibilities.

It’s a good sign that 2009’s comics scene can accommodate both. I hope neither feels squeezed out in coming years.