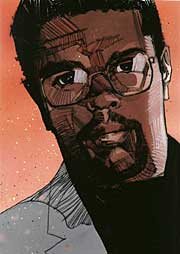 News of the untimely death, from surgical complications, of comics and animation writer Dwayne McDuffie burned through the news wires yesterday. A real shock (he was only in his late forties) and the loss of a strong and unique voice in the comics community.

This has been a week filled with reminders of how fragile life is, and the many ways the “real world” can intrude on our cozy, screen-filled worlds. Emails arrived from Iran and Egypt that helped put a face on conditions/recent events there (one on new business, one on old). I remembered talking to Dylan Horrocks just last week about his conversations with people in the thick of it, thinking how disconnected I was.

And, as many of you heard, there was another serious quake in Christchurch, New Zealand right after we left the country. If you’d like to contribute to efforts there, here are some details. Jason Webley was there for a concert and Amanda Palmer was on her way to Christchurch, so it was a little harder to keep it all at arms-length, having just seen them both.

Us nerds like to escape from the world through stories. But, inevitably, the rest of the world is going to come knocking. And, as McDuffie made clear for decades, any story can be richer when we throw the doors open and let the whole world in.