Do comics artists have musical twins? I think some do. For example, I’d say that Craig Thompson is the Sufjan Stevens of comics. Midwestern roots, struggles with faith, gorgeous compositions, a bit weepy… They even look similar (in fact, I was googling to make sure I was spelling both of their names correctly and came across this). 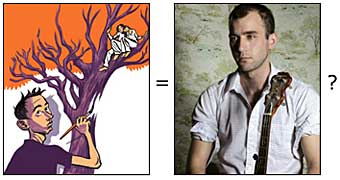 Others I’ve been toying with (or that have been suggested by others):

Some need two or more to match. I think that Bryan Lee O’Malley is a combination of Pizzicato Five and Go! Team, or maybe the Ting Tings, and Chris Ware might be our Radiohead, but you’d have to throw in some difficult turn-of-the-century composer like Charles Ives to really make it work.

My favorite suggestion so far was when Sky said that Ryan North oughtta be the Ramones because “the only thing that ever changes is the words.” I love my kids.

This whole thing started because of a now-defunct thread on the Comics Journal Message board on this same topic years ago. Someone had suggested that I could be the Raymond Scott of comics which I liked, but another poster logged in to say that I wasn’t good enough to be R.S. and was, in fact, the Thomas Dolby of comics. I objected, said that despite liking Dolby, I wanted to be the Raymond Scott of comics, to which my tormenter replied “make better comics then.” In the end, it was agreed that I could be upgraded to the Herbie Hancock of comics until further notice, which I thought was fair enough.