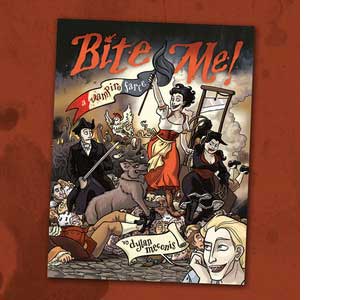 Dylan Meconis began her webcomic about vampires in the French Revolution back in high school, but you’d never know it from the smart, funny writing and accomplished artwork.

Now we can finally own it as a book so all is right in print as it is in pixels.

Also out this month (with a considerably bigger spine) is Tatsumi’s monumental A Drifting Life which I’ve been reading with great interest. Early in the book, the young cartoonist meets his hero, Osamu Tezuka, still in med school, but already a Manga sensation. I’d pulled over in my car to a shady spot to read a bit, and it made me think about how I’d been influenced by Tezuka, and had the pleasure of meeting some of my own heroes like Eisner when I was just starting out.

Starting to drive again, I realized that I was about to pass the cemetery where Jack Kirby was buried. I pulled in, parked, and picked up a small stone.

Dylan Meconis was in late elementary school when Jack Kirby died, and barely out of kindergarten when we lost Tezuka, but their genetic traces run through almost anyone making comics in America today, whether they realize it or not. It’s a long, long lineage, and it’ll be longer still with any luck.