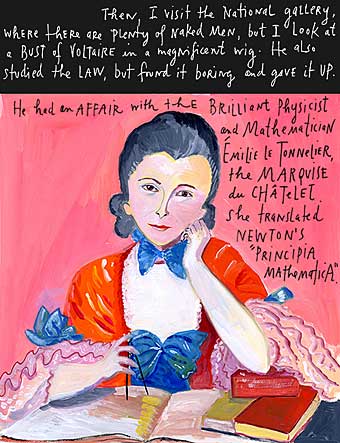 Courtesy of the New York Times this week, Maira Kalman’s And the Pursuit of Happiness is an enjoyable meditation on laws and those who preside over them.

And since Kalman’s comic is presented in one big scroll, it gives me a hook to also link to Dash Shaw’s gargantuan scrolling Bodyworld webcomic (completed earlier this year) which I’ve been meaning to blog about for awhile.

In principle, I always liked the idea of putting comics all together on one page; the idea being that readers could just hit a button or touch their scroll wheel and just use that one method to move all the way from beginning to end. I used the format myself a lot in my early webcomics.

It saddens me, though, to note that the big drawback of scrolling in the early days still hasn’t gone away after all these years. Most browsers still update images every few pixels while scrolling so that the entire page flickers and jitters all the way down until it stops. Dude, it’s 2009! Why does scrolling still hurt my eyes?