Some Thoughts on Asterios Polyp 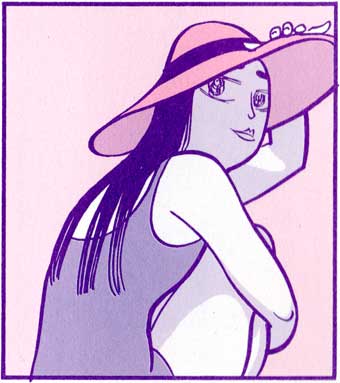 First of all, if you haven’t read David Mazzucchelli’s fantastic graphic novel Asterios Polyp, I strongly recommend getting yourself a copy. And stop reading this post now until after you’ve read the book.

If you’ve read Asterios Polyp once…

Seriously, Mazzucchelli’s book is a great re-reading experience. There are things you’re only likely to notice the second or third time around, and at least a few locked doorways in early sections that only open with keys from later chapters. And they’re much more fun if you find them on your own, so again you might want to ignore the rest of these ramblings if you haven’t plunged back in yet.

If you’ve read Asterios Polyp more than once…

Okay, NOW we can talk.

Here are a few things that caught my eye, in no particular order.

Great use of the three “printer’s primaries”: Cyan, Magenta, and Yellow. As symbols of “separation,” as time period markers, as state of mind indicators. Watching them come together late in the book had a transcendent quality for me, and I’ve heard from others that felt the same way.

Mazzucchelli also has a long-standing interest in the process of printing and likes the raw edges of printing itself to show through. His earlier self-published anthology (with painter/partner Richmond Lewis) Rubber Blanket had a similar hand-separated, process-obsessed feel (right down to the name).

There’s an undercurrent of honesty in the presentation. As if the book is saying “I’m not going to lie to you about what I am or where I came from.” This is true about a lot of aspects of the book in fact.

The “different styles –> different character” thing is pretty loaded for a ton of reasons, but I especially liked how it reinforces the idea of how each character is in their own universe to a degree. The book is filled with mismatched objects of all kinds thrown into a box that not only have their own appearance but almost their own physics.

Mazzucchelli is a master of western perspecitve when he wants to be, and he demonstrates that during the book. But in a lot of passages, he seems less interested here in creating a sense of continuous space that binds everything and everyone together. Instead, we get flat, isometric, or even childlike views of this landscape of barely compatible things that make up this world.

Check out the last 100 years of comics (in the West at least) and you’ll find a lot of variation in the size and shape of comics panels, but almost no variation in the space between panels. Mazzucchelli is a leader in considering that negative space for its role in the story and its role on the picture plane.

Every time the story seems to be stacking the deck in one direction, leading us to think some “lesson” is being taught, or that we can file a character as either worthy or useless, Mazzuccelli introduces a nice counter-weight.

I especially liked how Asterios’ three possessions (the lighter, the watch, the knife) play out. They work so well as markers of maturity, of unburdening, of selflessness, of acceptance of mortality, of putting the past behind him, of learning to value what works over theory, etc.; so harmonious and right that you could almost believe that the universe was ready to reward him. And then the lighter comes back alongside a bottle smashed over his head. Because that’s not the way the universe we live in works.

A couple of readers have already mentioned that Asterios at his most pedantic looks like he stepped out of the pages of one of my books (right down to the “‘splainin’ hand”). Whether the similarity is intentional or not, it’s a funny deconstruction of the kind of mind that thinks he/she (usually he) can somehow put the whole universe into a series of diagrams, and I’d have to cop to being a poster boy for that mindset.

Fortunately for fools like me, Mazzucchelli is a humanist first, and I think he loves all the fools that populate his story, and has no interest in passing divine judgement. He’s just chronicling the dizzying dance of futility we all participate in, each of us to our own steps and our own tune, as we try to make sense of the unfathomable.