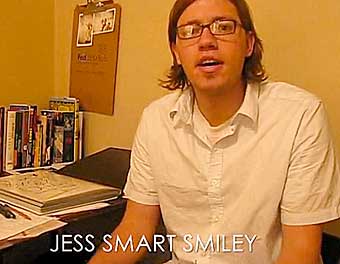 Jess Smart Smiley is Kickstarting a 500 copy run of his cool short story comic “A Map in the Dirt.”

Both Jess and Patrick Farley are five days from their goal (as I write this) and well within striking distance of making it (and they both deserve to). Feel free to help them over the finish line if you like what you see.

I’m intrigued by the Kickstarter phenomenon which seems to be getting a bit more traction than I would have expected. Looks like the arts community is getting increasingly comfortable with this sort of thing.

Donations have been around for a long time of course, but they’ve had a spotty history (Joey Manley once famously said “begging is not a business model” and he had a point at the time). Maybe all we needed was a central clearinghouse to make it viable.

Giving is getting easier! I don’t know about you, but I’ve been really grateful to see things like text message donations and supermarket check-out donations popping up lately.

I give more now, not because my conscience has evolved or anything but just because I’m lazy, and I know I’m not alone. It’s a great trend.

[Edit to add: Both Jess and Patrick made their goals with 3 days to spare! Congratulations to both.]