Daniel Lieske, Wormworld, and the Sense of Place 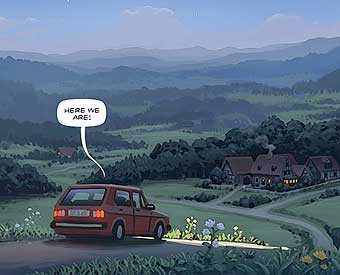 By far, the most impressive comics event while I was on break was the debut of Daniel Lieske’s online graphic novel The Wormworld Saga.

Lieske works at a German computer and console games company, and he’s obviously had years to hone his craft, but he’s a brand new name to me, and I’m glad to make his virtual acquaintance.

Despite coming out on Christmas day, when most potential readers were presumably distracted, the comic has garnered upwards of 200,000 viewers in less than three weeks, and deservedly so. It features solid storytelling and some gorgeous painted artwork. It’s also the best use of extended canvas storytelling I’ve seen in years.

Most impressive is Lieske’s all-encompassing sense of place; that rare sensation of becoming engulfed in a fully-realized new world. This is partially due to Lieske’s skills as a painter, but also to his smart use of extended establishing shots that blend into the black background behind other panels.

Set aside some time to read the first chapter. You’ll be glad you did. And if you like what you see, you can support the comic here, or contact him for work or a possible appearance here.

Oh! And congratulations to Daniel and his wife on the birth of their son yesterday! A busy month for a great new comics talent.