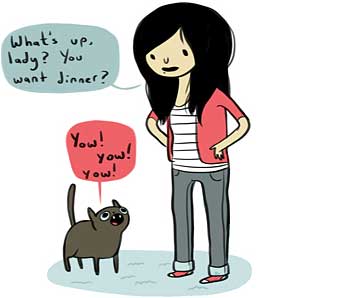 Natasha Allegri is like the Ivory-Billed Woodpecker* of comics artists. You have to camp out in her old natural habitat (LiveJournal apparently) for weeks to catch a glimpse, but it’s always worth it. Funny, wonderfully-drawn stuff.

There was a time when LiveJournal spread all the way from Venezuela to the northern tip of Uruguay, and Allegri was the talk of the rainforest. Literally the #2 account in terms of popularity at one point.

But her presence — like LJ itself — has dwindled due to… I dunno, actually. Day job, I assume.**

Now she’s joined the ranks of the many great cartoonists that deserves a much more solid web presentation.

Maybe, if we’re lucky, she has a big project on the way, and hasn’t just been struck by that humility virus that’s been going around. [see update below]

*[UPDATE #1: I have been informed that the Ivory-Billed Woodpecker is a bit more than rare. It may actually be EXTINCT. Clearly Natasha Allegri is not extinct. Sorry for any confusion. I just meant her Livejournal comics are rare and beloved.]

[UPDATE #4: Okay, you can also follow her on Twitter, which links to her Tumblr, which seems to be updated a bit more often.]

[UPDATE #5: I am wrong about everything.]