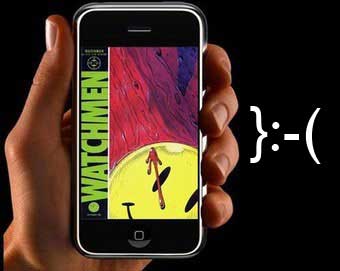 “…Goldman started with a definition of what comics are: stories told with words and pictures”

Dan Goldman is, I’m sure, using the above in the spirit of opening minds to comics’ range and flexibility. But under the image of the Watchmen “motion comic” it offers a grim reminder of how our conception of comics now can point us down some dark roads in the near future.

I don’t doubt that a lot of hard work and earnest creativity went into the building of the WMC, but if the future of comics is cheap pseudomovies on cell phones, you can count me out.