In Praise of Mr. Steinberg 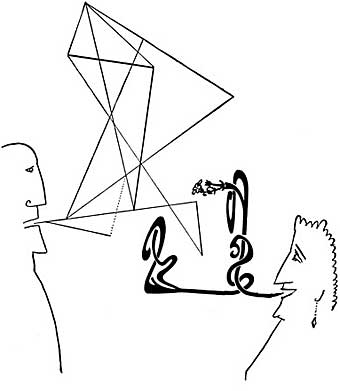 It’s true. I failed to mention Steinberg in my own review of AP, but now that Isabelinho has pointed it out, it’s hard not to see.

I always loved Saul Steinberg’s work and was influenced by him myself at an early age, though it might be harder to spot in my work. Of all the cartoonists whose work I’ve enjoyed, no one else was as comfortable to wander the big triangle in search of a visual idea.

It was liberating for a draftsman with limited gifts (that would be me) to understand that art could communicate the way written language does, while simultaneously flirting with both resemblance and abstraction.

Steinberg’s art made the possibilities of the picture plane look near and accessible to anyone in the mood to pick up a pen. And so they are.