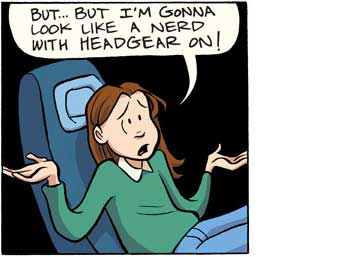 Raina Telgemeier’s graphic memoir for young readers Smile is set to drop a week from today. There’s a short excerpt here and you can even watch a youtube trailer for the book here.

The potential for this sort of comic shouldn’t be underestimated. I’d wager that if you put copies of Smile in any orthodontist’s office in the country, they’d be read to pieces by that (admittedly captive) audience.

There are so many subjects that could benefit from this treatment. Of all the pleasures that fiction offers, few have had such a consistent track record of building reader loyalty as a sense of personal connection. It was one of the key ingredients in Manga’s meteoric rise in the late 20th Century. There were manga series targeted at virtually any job, sport, game, social situation, or personal trauma you could name. “Hey, there’s a comic about me!” is one hell of a selling point.

When I look at a class filled with would-be comics artists, I know that most if not all of them want to break into the market we have now. But not every new comic has to fit into a shelf that’s already there. Some have the potential to create a new shelves out of thin air. And we need new shelves.