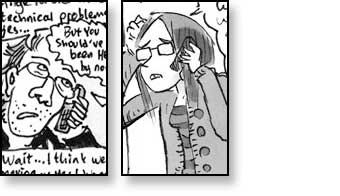 Here’s a cool idea: Rene Engström and Rasmus Gran have a long distance relationship and have decided to chronicle it in parallel diary comics (I would say it’s a unique idea, but I’ve actually seen at least one other!).

“Every Tuesday, since the 16th of March, Rasmus Gran and myself have documented our lives in the form of autobiographical comic strips. We have quite the buffer now so we feel pretty good about finally launching the comic. Our hopes are to give a little glimpse into the lives of a modern family spread out over the Swedish landscape, from downtown Östersund to Möllevången in Malmö. Sometimes we do things together but a large part of the time we have to live our lives apart.”

In other news, my host in Barcelona, David Macho Gomez, is launching Spanish comics site spanishinq.com.

For those of you who enjoyed Choose Your Own Carl (back in the Jurassic era), here’s another crossword-style comic.

And finally, on the work front, I’ve now finished the second rough draft of my graphic novel (working title The Sculptor). Next step: Beginning many months of finished art (and probably going back to make some more changes to the roughs, but that’s to be expected.) Wish me luck!