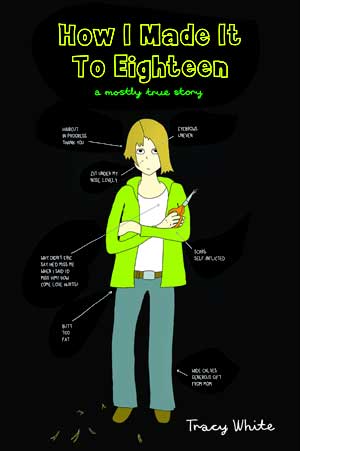 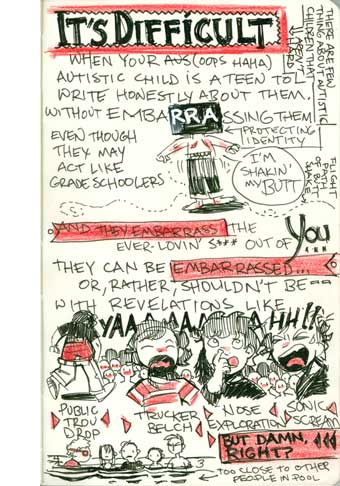 Been reading and enjoying two very different autobiographical comics; Tracy White’s memoir GN How I Made It to Eighteen and Lea Hernadez’s Near-Life Experience entries at LJ.

White’s book delivers literally on the title, detailing her recovery from mid-teen traumas, and how treatment helped her to not die before becoming the successful and accomplished adult she is today. And like her webcomics at traced.com, How I Made It to Eighteen is “guaranteed 95% true.” She’s changed names and details, but you know you’re getting the facts that matter.

Hernandez’s NLEx also struggles with those 5% quandries, in her case because she’s not writing about events and friends from decades ago, she’s writing about stuff that happened Tuesday, and about a family that might be in the next room. You can feel the inner struggle as she writes about how much she’s willing to write about her son’s ongoing struggles to fit in to society’s limited expectations of him.

It’s a real open question whether any autobiography can ever be more than 95% true. Mark Twain stipulated that his memoir not be published until 100 years after his death (this year!), presumably so that he could be 100% honest—a full implementation of the Mystery Quote—but from what I’ve heard, the old guy doesn’t come across as particularly objective while ranting about his many late-in-life grudges.

Emotional honesty and factual accuracy aren’t the same thing after all. Twain may have thought he was hitting 100%, but maybe nobody can ever get past 95%. And maybe saying so upfront, as White and Hernandez both do in their own fashion, is the most honest way to start.