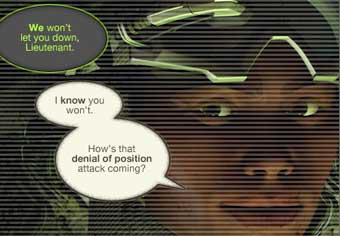 “‘The Spiders’ will update WEEKLY, from now until the story concludes. Also in the works: the site redesign (I’m *going* to make it work on the iPad if it kills me) as well as the reboot of ‘Apocamon’ and ‘Delta Thrives,’  both of which will appear later this summer.

Thank you thank you THANK YOU for allowing me this opportunity!  You’ve made me a very happy primate. “

Regarding the iPad mention, this is a decision a lot of cartoonists and other artists are making this year: abandoning Flash for the uncharted territory of HTML 5’s equivalent offerings.

Flash was a key ingredient for experimental webcomics artists like Farley and Daniel Merlin Goodbrey. It’s not clear yet how easy the transition is going to be, but Farley at least has decided it’s a necessary one in the long run, and I tend to agree with him.