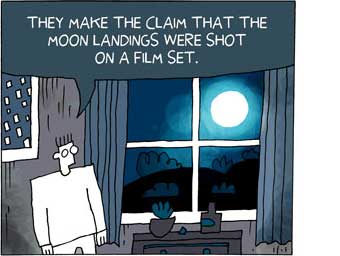 Darryl Cunningham demolishes the myth of a Moon Landing “Hoax” point by point.

Now on to all the other crazy things people con themselves into believing. It’s one hell of a long list, but at least we have a lot of idle cartoonists to chip in.

When my graphic novel is finished (with luck, in 2012), I’ve signed on to do another non-fiction book, and I wouldn’t mind coming to science’s defense on another topic the way that Cunningham has for this one.

[ETA: Carl in the comments thread points out that Cunningham has also taken on vaccines and homeopathy so I guess that’s three down, 9,997 to go.]