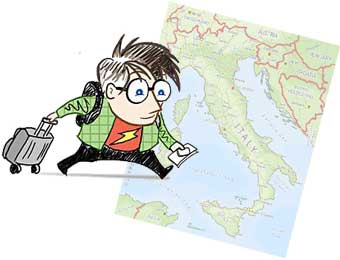 Off to Rome and Turin with the family this week. Back at the beginning of next week.

Don’t want to promise anything but we *might* upload some photos while in transit before then, so check in occasionally.

I Don’t Know about You, but THIS is the Superhero Movie I’VE been Waiting for

I’m even okay with the ’60s Batman-style sound effects! Thanks, everyone I’ve ever known for telling me about this as soon as I got home.

Oh, and hey, as long as it’s Random Friday, I’ve got a question: I’m dying to find a reeeeeally old music video from the ’80s—maybe even pre-MTV. It had a funky, electronic song (possibly no words) with black and white, photocopy-style animation. There was a recurring assembly line motif with hamburgers and hands and that creepy masonic eye/pyramid thing. Really cool and jerky, almost like it was made by a robot Terry Gilliam. Does anyone remember this video? I’d love to find it out there somewhere but I don’t know anything about the director or even the musician(s) involved.

UPDATE: It was the experimental film “Machine Song” by Chel White. Thanks to music video master Alex de Campi for the answer!

As some of you might have guessed, based on past blog entries, music is very important to our whole family. Sky is going to Coachella this year with a friend of ours and I’m envious, but after Italy, I’m going to be too eager to get back to work on the book, so I’ve got to miss it yet again.

I love that my daughter has been listening to bands like Passion Pit, Hot Chip, and Vampire Weekend* (all at Coachella) while simultaneously getting into Bob Dylan and Bob Marley, on LP no less—and that I had nothing to do with those last two. Well, any of them technically, (though I did discover Edward Sharpe and the Magnetic Zeros before her).

I used music constantly while working on the first draft of the layouts for the new book. I had several different playlists for different kinds of scenes and I’d go for long walks trying to imagine sequences, while letting the music sustain the mood I was going for.

Recently though, I mentioned this to my Mom over the phone and she said she hoped I took the headphones off once in a while to listen to the sounds around me too. (Which is both reasonable, and exactly the kind of thing you count on a Mom to say.)

Funny thing is, though, I’ve discovered that music actually distracts me during those walks now that I’ve entered the rewriting stage of the layouts. Keeping a sustained mood through music actually makes it harder to step back and consider the structure of a scene or set of scenes in my head, and how to change them for the better, or to implement the suggestions of my panel of “kibitzers.”

That trance I needed to put myself in while conceiving sequences would now prevent me from evaluating those scenes objectively. More proof, if any was needed, that we need to appeal to different aspects of our creative personality at different stages of the creative process.

*Pop Quiz: If I added Peter Gabriel’s name to those three band names and asked you which of the four was not like the others, which would you pick and why?

Rube Goldberg was a Real Guy!

Ivy and I love both of the new OK Go videos for “This Too Shall Pass” (check out the marching band one also) but I’m especially fond of the Rube Goldberg machine version because I remember making stuff like this as a kid.

It’s been almost a century since the real-life Rube Goldberg started creating his ingenious cartoon machines on America’s funny pages, but his place in pop culture is as secure as ever.

Everybody sends out ripples in life, but some are more pronounced than others. I think most artists (unless they’re Buddhists?) like the idea that their own ripples will travel for a long time, but you can never predict exactly what shape they might take.

In looking over this travesty, keep in mind that the “crime” in question is essentially a Thought Crime with no victims, and that the man going to jail is doing so for a small fraction of the comics in his collection. If these sorts of victimless crimes sound insane to you as they do to me and my family, please consider a donation to help fight such cases in the future.

In happier news, I notice today’s Google Doodle (Feb 16) is Curling! Since Ivy’s curling these days, I’m giving a shout-out to a great sport that’s finally living large in a country that appreciates it. You can bet we’ll be watching whatever meager coverage it gets here in the States.

Meanwhile, this post about hand strain (via Dirk) gives me an opportunity to share some tips that I’ve found useful for avoiding hand strain.

1. Fatten your grip. A simple, easy way to reduce hand strain is to widen the radius of the tools you use most often. Above left is a shot of my big fat Cintiq pen, courtesy of some masking and packing tape. Ugly as hell, but just as easy to use and less likely to freak out my tendons.

2. Feet on the Floor. Seriously, your whole body relaxes when your feet are flat on the floor. If necessary get one of those raised foot rests. I was surprised how well this worked, but it really did.

3. Drawing big. If you’re all digital like me, zooming in can help make most drawing tasks a matter of forearm movement rather than wrist movement, which makes a big difference.

4. Use your breaks. When I was having problems and was taking breaks of five minutes for every twenty, I used a timer and took it as an opportunity to catch up on some reading. It was actually kind of fun to have to read about an hour more each day.

5. See a Pro. If you ever get the tingles, see someone right away. There are specialists who can help and save you a lot of money in the long run.

And of course there’s a ton of information online as usual. Click around to learn more (at least until the clicking starts to hurt).

Back Home | Odds and Ends 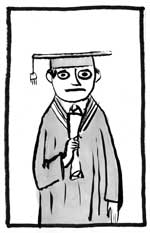 Back home from my visit to the University of Houston. Thanks to everybody who came out Tuesday for the lecture and to my gracious hosts. I especially enjoyed my stay at the slightly bizarre Hotel Zaza, with two great art museums right next door. I even found a painting of people curling which I had to call and tell Ivy about.

(Yes, my wife has been curling. In Southern California. How cool is that?!)

Some odds and ends:

Mobile comics outfits have been moving into the iPad space (thanks to Zach in the last post’s comments). I’d be curious to know how many will be rolling out content in time for March. At the very least, retrofitting printed comics for the iPad will involve less violent “repurposing,” but ultimately I’d be more interested in comics designed specifically for the new device and its inevitable imitators. Douglas Wolk offers some thoughts here too.

Without the load times, this interface is actually kind of cool.

In other news: Heh. I’m such a nerd. That totally worked for me.

Belated Happy Birthday to Ivy! We went to Disneyland for her birthday on Tuesday after a very full day of work Monday, and yesterday was a lot printing and mailing, so I didn’t get much blogging, tweeting, or, um… facing… in this week.

Round One of the “rough draft” for the graphic novel is done! I’ll be working on revisions/rewrites for the next couple of months and then, starting in March, I’ll be doing finished art for two years. The book is currently at a whopping 461 pages, but I’m hoping it’ll get shorter in revisions. (Note that my “rough draft” is basically just a rough sketched-out version of what the finished book will look like, all captions and balloons in).

Fun fact: My roughs are done forty pages at a time in a single photoshop document so I can slide panels back and forth and think of the flow more organically and not let the page dictate pacing too much. They’re really big files!

The whole family is getting into the Avett Brothers this year.

Winter and I finally finished watching Deathnote on DVD. All the kids in anime club were yelling at her to finish it already so they could talk about it. That is one crazy show! (And oh, man, that opening theme and animation for Season 2…)

The preview for Iron Man 2 makes me feel 14 years old again. In a good way.

Best comic of the year? For me, probably Asterios Polyp, but now that I have a bit of free time, I need to read a few more contenders.

Creatively, I thought 2009 was a great year for comics, music, and movies. Financially, though, it sucked donkey balls for a lot of people in our community. Let’s hope ’10 is better.

“It turns out though, that because most of my friends are cartoonists, they’re uninsured too…”

Julia Wertz on living with lupus and being uninsured. (link via Mike Lynch)

Ivy and I were uninsured for the first several years of our marriage. Then Winter swallowed a penny when she was two and it cost us seven hundred thousand pennies to get it out.

Getting health insurance is a really good idea (as is fixing the whole system, though that’s another topic). It’s sad that so few in this business—at least on the alternative/small press end—feel they can afford it.

[More on this topic from Evan Dorkin, plus (via Tom in the comments) here’s some older, but still relevant info from Colleen Doran.]

Happy Thanksgiving to all our U.S. readers.

It may be in a purely secular way, but I do feel a continuous sense of gratitude these days—to fate if nothing else. But for those of you who still give thanks to “the man upstairs,” here’s the poem my family always recited before Thanksgiving dinner each year.

I always liked it (though our version had fewer “and”s). 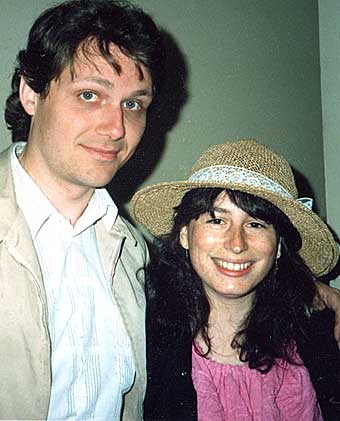 In honor of 24-Hour Comics Day, here’s an old photo of Ivy and me I just received, via my Aunt Pat, dating from around the period over 19 years ago, when the first 24-hour comic was drawn in our Somerville, Massachusetts apartment.

As mentioned last Tuesday, I’m just a bystander this year, but good luck to all those participating today. You’re about to scale the Mount Everest of comics. Don’t forget to breath! 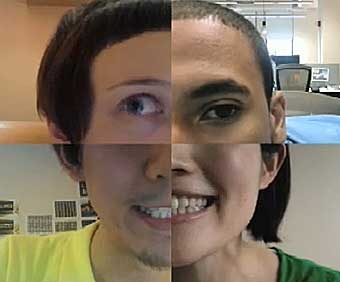